In 1988, Bridgwater’s Sheep Worrying Theatre Group  performed a play about the 1938 Bridgwater by-election called ‘The Vernon Bartlett Show’. It was premiered at the Bridgwater Arts Centre, written by Brian Smedley and directed by Glen Burrows.

It was the 15th Full length play put on by Sheep Worrying and the 3rd in the series of Socialist Local History plays by Brian Smedley. The others were Brickyard Strike (1986) + Siege of Bridgwater (1987).

The real life story was interspersed with a sub plot based around a Bridgwater family and its authoritarian father figure Harry (Brian Smedley) and weak willed mother Frances (Glen Burrows). plus a bevy of children with their range of responses to the ever worsening situations they found themselves in. This was (rather tangibly) meant to mirror the International scene of the day. Harry (clearly Hitlerite Germany) was backed up by sidekick Benny (Nigel Carter) and Frank (Mac McCausland). (Do we need to say who they were meant to be…?…really??) The children included Celia (Abbey Wilkes) Polly (Elaine di Campo) Rebecca (Alexia Vernon) Tommy (Glenn Cane) and Joe (Jeremy Gardner)

The story of the Bartlett election was developed through a series of interviews in Spring 1988 done by Smedley with Sir Richard Acland in his Broadclyst cottage, Tom Edmunds (in a caravan in Exmouth) and Basil Lott (several letters and numerous phone calls) plus reminiscences of Bridgwaters eldest statesman Cllr John Turner, Bud’s son Gordon Fisher, and 1938 Bristol Hotel chambermaid Hilda Pound.

The plot within a plot was drawn from the experiences of Mary Smedley (the author’s mother) based on her own family in the Leeds back to backs of the 1930s. The characters were all true to life and matched aunties, uncles and grandparents – all now long gone.

In the story, Harry terrorises his family and no-one stands up to his ‘hand me down’ violence. Celia the youngest is his immediate victim and Polly likely to be next. Rebecca is already setting an example of resistance in her domestic battleground with her husband Frank and is eventually, left alone to her fate, killed by him. Eventually Tommy and Joe stand up to Harry and unite (what’s left of) the family again. This rather blatant allegory maybe doesn’t need explaining..but for the sake of historical reference (and future pleas for transparency in scriptwriting) Celia (Czechoslovakia) Polly (Poland) Rebecca (Republican Spain) Frank (Fascist Spain) Benny (Fascist Italy) Tommy (Britain) Frances (France) and Joe (The Soviet Union). It couldn’t be clearer.

I’m sure we’d have included an America… but he would’ve probably only turned up in the middle of the next play….

a clip from the 1988 Sheep Worrying play

To find out more about SHEEP WORRYING 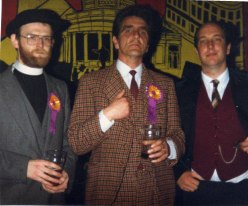 The full cast on stage at the Bridgwater Arts Centre. Students from Chilton Trinity school had painted the skyline – to represent the shadow over Bridgwater in 1938…