At the height of the late-Spring Czech Crisis, another by-election saw international affairs brought sharply into focus in sleepy rural England. The electoral contest in Mid Bucks didn’t bring the same left-wing unity that was so integral to Bartlett’s success in Bridgwater, however.

What occurred was a clash between two different left-wing approaches – the Popular Front, as demonstrated in Bridgwater, in which communists and socialists co-operate with more mainstream groups like the Liberals, and the United Front, a more rigidly leftist strategy. The Mid Bucks Labour candidate, Reg Groves, was a staunch Trotskyist, and refused to stand down in favour of a Liberal candidate better-placed locally to beat the National government-endorsed Tory.

The result was a Conservative victory – but Groves, having significantly sapped Tory and Liberal support, was jubilant: “we have delivered the death-blow to Liberalism in this division.”

A media debate ensued, setting the tone for left-wing strategy in later elections, Bridgwater incuded. Labour’s own newspaper, the Daily Herald, echoed Groves’s delight, and stood by their candidate’s unwillingness to see the needs of workers swamped by a liberal-centrist agenda.

Both the New Statesman and the Nation expressed surprise at the increased electoral support for Groves’s United Front strategy, while by contrast the centre-left News Chronicle, Vernon Bartlett’s own paper, wasn’t in the least bit surprised at the damage Grove had done to the more inclusive Popular Front strategy. It was the Communists, though, who proved Groves’s bitterest critics of all – their Daily Worker mouthpiece decried his “divisive Trotskyist splitting tactics”.

Groves himself argued that he was helping to build Labour’s presence in Aylesbury, against Liberalism and Toryism. A pact, he suggested, would have lost Labour support in the long-term. He thought that support for the Popular Front lay “among the middle class element, the university socialists, the ‘week-enders’ who had never done a day’s work for the local party, and the social élite of the Left Book Club”.

Frederick Warburg congratulated him (‘magnificent’ work) as did JP Millar, who announced he had ‘no faith whatever in the Popular Front’.

Election results below (1935 figures in brackets)

The Barnsley election came about due to the death of sitting Labour MP John Potts in April 1938. Potts had lost his seat to the National Liberals in 1931, having refused to support Ramsay McDonald’s Labour minority in a Tory-dominated national coalition government. By 1935 he’d won it again in, after the National government had become more overtly Conservative.

Barnsley’s ’38 election became a struggle between a Labour opponent of the National government, and a National Liberal supporter of it. After a hard campaign, with the Tories keeping out of it to give the National Liberal a free run, the Labour candidate, Frank Collindridge, won with an increased majority.

In Oxford, the Liberals had selected Ivor Davies, a 23-year-old Edinburgh graduate , despite the fact that he was the candidate for Central Aberdeenshire at the same time. The Labour party selected Patrick Gordon Walker, who had contested the seat at the 1935 election.

On 13th September, Davies offered to stand down as a candidate if Labour did the same, allowing them both to back a Popular Front candidate against the Conservatives. Eventually, Gordon Walker reluctantly stood down, and both parties supported Sandy Lindsay, Master of Balliol College, as an Independent Progressive. On 14th September, the Conservatives selected Quintin Hogg, a fellow of All Souls College and ex-President of the Oxford Union Society.

The campaign was intense and focused almost entirely on foreign affairs. Hogg supported Chamberlain’s appeasement policy. Lindsay opposed appeasement; his campaigners used the slogan, “A vote for Hogg is a vote for Hitler.”

Lindsay was supported by many dissident Conservatives – notably including future Prime Minister Harold MacMillan – who were opposed to the Munich Agreement. A number of future politicians like Edward Heath and Roy Jenkins, both at Oxford University at the time, cut their teeth in the Michaelmas campaign.

The sixth of the 1938 by-elections was fought at Lewisham, and was a straight battle between anti-appeasement Labour and pro-Chamberlain National Conservative.

“We cannot hide from ourselves that the terms secured by Hitler represented a triumph, not for reason, but for blackmail by threats of force. The democratic Czechoslovak Republic has been handed over to dismemberment and despoiled by ruthless dictatorships. But that is not all. Everywhere the people have suffered a major defeat. Hitler has gained vastly increased resources to equip him for further aggression. Not peace has been attained but only an armed truce—which is apparently to be used to be used to pile up more armaments. No criticism of the Munich Agreement could be more damning.” 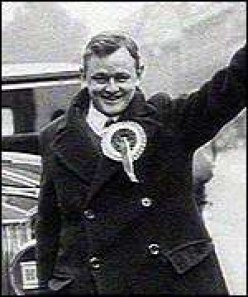 A Vote For Hogg!

A Vote For Hitler

But they were also a battleground for the POPULAR FRONT strategy.

At Barnsley and Lewisham the solid Traditional Labour or Tory bedrock of the seats clouded any political assessment.

The two key by-elections were in Oxford, where the National Government scraped a win in the face of a huge swing against them, and, crucially in BRIDGWATER, where the opposition forces – evenly balanced at the off – stood aside to allow a genuinely independent candidate to tackle the Government policy head on. The outcome would be critical and historic.

Lindsay was professor of moral philosophy at Oxford University. A socialist, one of his students, Christopher Hill, later argued: “His influence on students between the two world wars was incalculable, and time and time again he gave a lead where few others in university circles did. As vice-chancellor of Oxford University (1935-38). he was regarded as a dangerous revolutionary by many of his colleagues, particularly when he stood as the Popular Front candidate in the 1938 by-election. Nowadays he would be regarded as a left-wing liberal.”