By June 1938, fears were widespread that the Czecoslovakia crisis would soon lead to another European, if not world, war.

Somewhat surreally, the Bridgwater Peace Group was busying itself with debating the Christian attitude to air raid precautions. With at least four vicars present, it was concluded that “the Gospels told us to love your enemies and pray for them that persecute you. Air raid precautions come about because of fear, and there is no fear in LOVE. Such would cause false security amidst a feeling of the inevitability of war.”

But even the town Peace Group was divided – a frustrated Arthur Wevell, headmaster of Westover school, First World War veteran and union activist, broke ranks: “I fail to see that any man could do anything else than prepare himself to help his fellow man in need. I appreciate the talk of Christianity, but it is the duty of Christians to do something rather than just talk. It’s as well to “speak a little less of the Prince of Peace and a little more of the Angel of Common Sense.””

While the Peace Group squabbled, elsewhere in Bridgwater progressive forces were debating more pressing matters – namely, the pros and cons of forming a united left-wing Popular Front to take on the National government.

On the outside left, Bridgwater’s very own maverick communist Bud Fisher was sticking his Popular Front oar in: “we talk of air raid precautions – but the rich are already building shelters! How can the poor afford them? Is war inevitable? It certainly is not – if we return to the policies of the League of Nations and the unity of all democratic forces, we can avert war. Unless we take every step now against war, a war too horrible to contemplate, the letters RIP not ARP will be in the forefront.”

A series of Sunday meetings organised by Labour supporters revealed division in the party. Mainstream Labour leaders urged caution, sceptical of alliance with the Liberals or groups further to the left. Labour’s national leading lights were, as Webb and Acland had predicted, resistant to Popular Front. Trade union figures like Ernest Bevin felt the same – some feared such agreements were just a stab at power by the Communist Party. Rhys Davis, Labour MP for Westhoughton,warned of the danger of “dictatorships from both sides. I would like to live long enough to wipe my feet in the dust of all dictatorships from Franco to  Stalin”. His audience seemed less convinced, and many cries of ‘shame!’ were heard.

In Bridgwater, though, anti-militarist feeling was undoubtedly rising in the town Labour Party. As the international crisis peaked in June, Labour members of the Town Council passionately lobbied against naval officers going recruiting in local schools.

Labour veteran Jim Boltz argued that Tories and Liberals “would certainly object if Trades Union leaders wanted to go into schools to recruit”. He was met with ridicule from Liberal councillor Harold Scholfield, who “didnt think councillors would object if these leaders went to show boys how to become trade union ‘leaders’, but not to urge the boys to join the TU movement”. Labourite Cllr Harry Goodman,  however, supported Boltz. He feared the armed services were “..attempting to conscript the minds of the younger generation” and he felt “His Majesty ‘s Services are comparable only to poor law relief.”

Lansbury called for “a new world conference to settle territorial disputes”, while passionately endorsing international disarmament: “the more you pile up armaments, the more certain war becomes. We need to remove the causes that bring about war – to learn how to share, not destroy the world”. The Peace Pledge union, Lansbury went on, “represents 180,000 who have pledged to take no part in war. We have taken that pledge because we believe war can do no good. If we ourselves wish to do good, so that if we ourselves wish to do good then we must renounce it”.

But in stepped Neville Chamberlain – replacing Baldwin as leader of the National government – to post-pone armed confrontation. At the eleventh hour, he flew to Munich to meet Hitler, where he made enough concessions (at Czechoslovakia’s expense) to prevent immediate war. Obviously, the Czechs weren’t invited to the negotiations.

Relief was palpable across the Western world. The Bridgwater Mercury, for its part, detailed the Munich agreement in full, and enthusiastically recorded the international acclaim that now greeted “Chamberlain the peacemaker” on his return. Church bells rang, and churches gave thanksgiving for peace across the county, and the country.

But dissenting voices were still to be heard. Those morally opposed to Chamberlain’s compromise spoke up – the gist being that while peace had been temporarily maintained, “the Czechs have accepted a surrender equivalent to a defeat in war.” High-ranking Conservative Duff Cooper resigned from Chamberlain’s cabinet in disgust.

As a ‘peaceful October’ dawned, Brigwater constituency Labour members were downbeat at a meeting at Highbridge Town Hall. J. Donovan, area secretary of the Transport and General Worker’s Union, spoke for many when he said “whilst the Trade Union movement was prepared to put all its resources at the disposal of the Government in the recent crisis, nevertheless … if someone saved us from war by the sacrifice of some small nation then I’m not sure they should be congratulated.”

Richard Acland, meanwhile, had not been idle. Exactly as he had planned, on October 10th it was announced that Croom-Johnson was to stand down as Bridgwater’s MP, having been mysteriously appointed as a high court judge. The result was a Bridgwater by-election, and Acland was determined the Munich agreement would be the central issue.

The National Government was thrown into crisis when First lord of the Admiralty Duff Cooper resigned over Chamberlains foreign policy. Winston Churchill in the background. 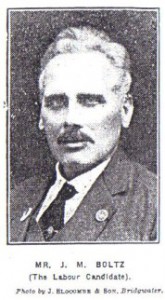 “Former Labour leader George Lansbury was chair of the No More War Movement, chair of the War Resisters’ International, 1936–1940, and President of the Peace Pledge Union, 1937-1940. He was a critic of British policy towards the Spanish Civil War and worked with Spanish pacifist José Brocca. His efforts to prevent World War II led him to visit most of the heads of government in Europe, including Adolf Hitler and Benito Mussolini. His popularity was considerable but his politics were viewed as increasingly naive in the face of the rise of armed fascist states espousing expansionism. In the summer of 1938 he spoke to large crowds in Taunton in support of appeasement.”

“As the Czechoslovakia crisis worsened so preparations for war became a reality around Britain. ARP wardens , (seen here marching in Minehead), gas masks , trenches and sandbags all became a common sight heightening tension around the country as a solution appeared impossible.”