The mountainous borders of the Czech state were largely populated by a sizeable German-speaking minority. Although these Medieval German migrants had never been part of Germany proper, they fondly recalled the recently deceased German-speaking Austro-Hungarian Empire. However, on Hitler’s orders, the local Nazi leader Konrad Henlein stirred up the Sudentens against the multi-ethnic Czech state, thus creating a major crisis which, by the summer of 1938, was threatening to engulf Europe in a Second World War 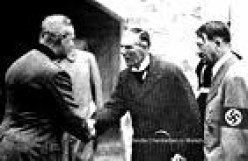 At a Conference held in Munich in September 1938, Britain, France, Germany and Italy met to discuss what to do about the crisis in Czechoslovakia. The Czechs weren’t even invited. The Munich Conference was in fact a series of meetings between the key players starting when Chamberlain flew to meet Hitler at Berchtesgarten on September 15 and concluding in Munich on 28th September when a document was approved and released to the world.

Agreement reached on September 29, 1938, between Germany, the United Kingdom, France, and Italy:

“Germany, the United Kingdom, France, and Italy, taking into consideration the agreement, which has been already reached in principle for the cession to Germany of the Sudeten German territory, have agreed on the following terms and conditions governing the said cession and the measures consequent thereon, and by this agreement they each hold themselves responsible for the steps necessary to secure it’s fulfillment.

Annex to the Agreement

His Majesty’s Government in the United Kingdom and the French Government have entered into the above agreement on the basis that they stand by the offer, contained in paragraph 6 of the Anglo-French proposals of September 19th, relating to an international guarantee of the new boundaries of the Czechoslovak State against unprovoked aggression. When the question of the Polish and Hungarian minorities in Czechoslovakia has been settled, Germany and Italy for their part will give a guarantee to Czechoslovakia.
Munich, September 29, 1938

The four Heads of Government here present agree that the international commission, provided for in the agreement signed by them today, shall consist of the State Secretary in the German Foreign Office, the British, French, and Italian Ambassadors accredited in Berlin, and a representative to be nominated by the Government of Czechoslovakia.
Munich, September 29, 1938

All questions which may arise out of the transfer of the territory shall be considered as coming within the terms of reference to the international commission.
Munich, September 29, 1938″

End of the First Republic

As a result of the Munich Agreement, the greatly weakened Czechoslovak Republic was forced to grant major concessions to the other non-Czechs within their borders.

The executive committee of the Slovak Populist Party met at Zilina on October 5, 1938, and with the acquiescence of all Slovak parties except the Social Democrats formed an autonomous Slovak Government under the quasi-fascist Father Tiso.

Similarly, the two major factions in Sub-carpathian Ruthenia, the Russophiles and Ukrainophiles, agreed on the establishment of an autonomous government, which was constituted on October 8, 1938. The pro-Ukrainian faction, led by Volosin, gained control of the local government, and Sub-Carpathian Ruthenia was renamed Carpatho-Ukraine.

Neville Chamberlain – Britain’s Prime Minister (Conservative) -“The settlement to the Czechoslovakia problem is, in my view, only the prelude to a larger settlement in which all Europe may find peace.”…however, in later years he wrote to his sisters “You have only to look at the map to see that nothing we could do could possibly save Czechoslovakia from being overrun by the Germans.” 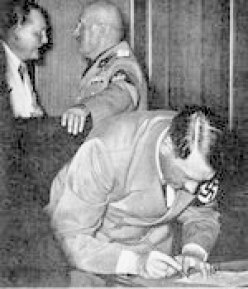 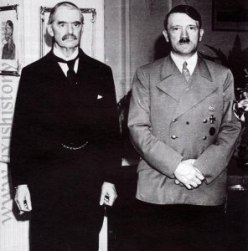 “We, the German Führer and Chancellor and the British Prime Minister, have had a further meeting today and are agreed in recognizing that the question of Anglo-German relations is of the first importance for the two countries and for Europe.” “We regard the agreement signed last night and the Anglo-German Naval Agreement as Symbolic of the desire of our two peoples never to go to war with one another again. We are resolved that the method of consultation shall be the method adopted to deal with any other questions that may concern our two countries.”

The price of peace agreed to by Neville Chamberlain was collosal. Germany was permitted to occupy the Sudetenland and the Czechs compelled to leave. This was an area of 11,000 square miles containing 800,000 people, 70% of the Czechs Iron and Steel works, 80% of their textiles,chemicals and glass works, 55% of their coal and 93% of their lignite. Further to this it included the mountainous borders – which had been strengthened with a ‘Czech Maginot’ line and meant the dismantling of the 40 Czech military divisions. The British had sacrificed the Czechs and lost an ally along with their honour and credibility. 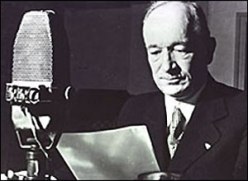 Eduard Benes, despite his brave stand against Hitler, has lost the fight and now is compelled to resign. Around Czechoslovakia there are angry demonstrations and bewilderment.