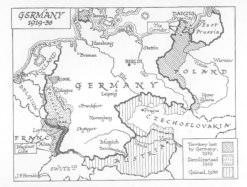 After Germanys defeat in World War I, her territories were confiscated by the treaty of Versailles. In the following decades, through a combination of political bluff and military sabre-rattling, these areas were restored to it one by one while the West stood by.

On March 12 1938, Germany pressure on Austria led to it giving in to Hitler’s demands and accepting an ‘Anschluss’ – a union with Germany. Austria was a German speaking country but had never been ruled from Berlin. Now its absorption into the Third Reich meant Czechoslovakia was surrounded on three sides.

At the the final Nuremburg rally on September 12th 1938, Hitler attacked the Czechs and their President Benes.

The next day, the Nazi puppet leader of the Germany-bordering Sudeten area, Konrad Henlei,n unleashed his stormtroopers and 7 Czech anti-fascist activists are murdered in Sokolov. Benes declared martial law to try to contain the situation. Hitler meanwhile prepared to launch ‘Fall Grun’ – a military plan conceived in 1937 which envisaged an attack on Czechoslovakia by September 1938.

Back in Berlin  Hitler stepped up the pressure and turned up the volume with an earth-shattering speech at the Sportzplatz.

Konrad Henlein – leader of the Sudetenland Nazis jumps to the sound of his masters voice, echoing calls for the overthrow of the Czech state and unleashing Fascist street gangs.

American journalist William Shirer, sitting in the balcony directly above the German Chancellor, thought Hitler was “in the worst state of excitement I’ve ever seen him in”. But Hitler’s speech was “a psychological masterpiece” according to Goebbels.

Hitler was in his element as he heaped scorn on the Czechoslovakian state and its president Eduard Beneš, who was apparently “determined … slowly to exterminate Germany” . Referring to the memorandum he had presented to British Prime Minister Neville Chamberlain, and the offer he had made to the Czechs, Hitler indicated that his tolerance of Beneš was now at an end.

Cynically, Hitler praised Chamberlain for his peace efforts. He assured Chamberlain that he had no further territorial demands in Europe – once the Sudeten problem was solved. He also guaranteed that he had no further interest in the Czech state. “We don’t want any Czechs at all,” he declared. The decision for peace rested with Beneš: “he will either accept this offer and finally give freedom to the Germans, or we will take this freedom ourselves!”. Hitler promised to lead a united people as first soldier. “We are determined. Herr Beneš may now choose,” Hitler concluded. The mob in the hall, which had interrupted almost every sentence with fanatical applause, shouted, cheered, and chanted: “Führer command, we will follow!” Hitler had worked himself into an almost orgasmic climax by the end of his speech. Goebbels, closing the meeting, pledged the loyalty of the German people to their Führer and declared, “a November 1918 will never be repeated.” Hitler, according to Shirer, “looked up to him, a wild, eager expression in his eyes … leaped to his feet and with a fanatical fire in his eyes… brought his right hand, after a grand sweep,  pounding down on the table and yelled… “Ja!””

One Minute to Midnight… 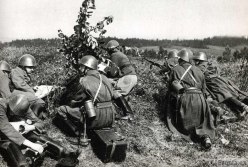 The Czechs Wait …and put their faith in their Western Allies.

Tension was high as war looked imminent. The Times Newspaper called for the Czechs to “give the Sudetenland to Germany”, President Roosevelt appealed for peace yet made it clear that “the USA would remain neutral in a war between Germany and Czechoslovakia”.

All eyes were on the Czechs’ French allies, who had built its collective security on a system of guarantees to the newly independent multi-ethnic East European states. At the start of the year, the Popular Front Government of Leon Blum had promised to honour these guarantees, but by September France was in the hands of Eduard Daladier and Georges Bonnet – both pro appeasement politicians and increasingly secure behind their ‘Maginot line’.

Herman Goering (a Nazi) speaks out

Senior German politician describes the Czechs as “..a miserable pygmy race who are harassing the human race” 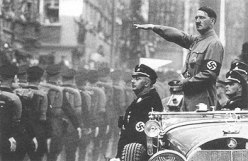 The World Holds Its Breath