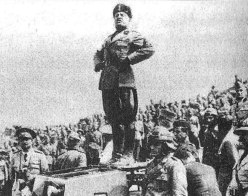 In 1922 Benito Mussolini seized power in Rome and introduced the world to fascism, the latest in brutally authoritarian, racist, anti-socialist dictatorships.

Perceived ‘subversives’ were silenced through state censorship and a single, unchallengeable view of the world was imposed by a ministry of propaganda.

By 1925, any semblance of democracy had been dispensed with, and Mussolini’s mass movement of street thugs, known as Blackshirts for their distinctive attire, beat up political opponents, shut down left-wing newspapers and generally crushed all dissent.

Having exchanged liberal democracy for an authoritarian police state, Mussolini dreamt of imperial glory, and a new Roman Empire extending into the Mediterranean and Africa. Fascist Italy invaded Libya, Abyssinia and Albania, mercilessly crushing lightly armed local resistance with Mussolini’s mechanised war machine, all in a bid to to make Italy “great,respected and feared”.

In 1933, Adolf Hitler’s Nazi party came to power in Germany. His political ambitions, future war aims and racial theories had been laid out in his book ‘Mein Kampf’.  Germany’s problems, Hitler claimed, were ’caused by the Jews’. To survive, Germany had to to ‘expand to the east’ and displace the ‘lesser Slavic peoples’ who lived there. This was Germany’s right, as the home of the ‘the Aryan Master Race’.

Hitler started his political life as an embittered Corporal in the trenches of the First World War. When Germany was defeated in 1918 and subjected thereafter to humiliating victory conditions, Hitler swore revenge.

The National Socialist German Worker’s Party, or Nazis for short, formed with this vengeful aim in mind. Fuelled by a bitter hatred of Jews and communists, and liberally employing the street thug terror popularised by Mussolini’s Blackshirts, they quickly made their mark in a Germany wracked by unemployment and post-war discontent. In 1923, Hitler’s Nazis launched a failed coup d’etat. It was crushed, Hitler was arrested and then imprisoned, but this unfortunately gave him the time to write down his ideas in literary form.

By 1933, Hitler’s fortunes had reversed. His party was elected to power after a fierce campaign that played to the lowest racial prejudices of the German people and promised national glory.

As Hitler’s totalitarian power grew, Nazi Germany rearmed and expanded, opponents were rounded up, beaten, imprisoned and eliminated, and other nations were compelled to find political or military solutions within a generation of the so-called  ‘War to end all wars’. 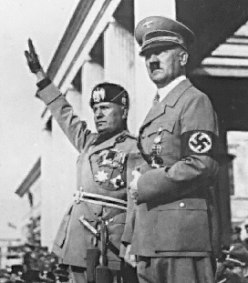 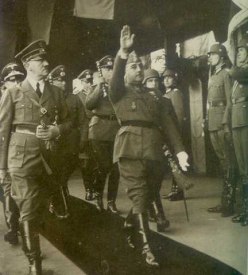 In 1936 the Fascist General Franco launched a military rebellion to bring down the democratically elected Republican Government of Spain. Hitler and Mussolini backed his coup and sent aid. Spain became the military training ground for the Fascist wars to come. In 1937 the Basque town of Guernica was the first to be devastated by aerial bombardment.

All You Fascists Bound to Lose