One strategy for fighting fascism was the formation of ‘Popular Front’ Governments. This involved alliances of ‘Progressive’ parties from the left and centre of the political spectrum, like the one formed in France in 1934 by of Socialists, Communists and Radicals.

In 1936 Spanish Republicans found themselves in a state of open warfare with General Franco’s fascists, who were encouraged and supported by the German and Italian military. The Republic was aided by the USSR, plus Volunteers from all over the world including Trades Unionists, Socialists, and Democrats. A response to an ACTUAL fight against Fascism was needed. 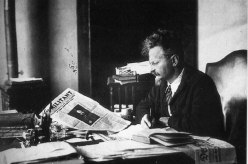 Or United Fronts – Popular Front tactics were criticised by Left Socialists such as Leon Trotsky who argued that in such situations demands for working class advancement took a back seat. This was essentially a battle in his war with Soviet Leader Josef Stalin who supported the Popular Front strategy (and had Trotsky murdered in 1940 to settle the matter).

Or United Fronts – Popular Front tactics were criticised by Left Socialists such as Leon Trotsky who argued that in such situations demands for working class advancement took a back seat. This was essentially a battle in his war with Soviet Leader Josef Stalin who supported the Popular Front strategy (and had Trotsky murdered in 1940 to settle the matter).

The debate on the left

When, in July 1936, the Spanish Civil War broke out , it was clear that General Franco’s forces were being helped by Fascist Italy and Nazi Germany – and that the Spanish Republican Government was being refused the right to buy arms.

A policy of “non-intervention” was proposed by the French “Popular Front” Government, led by the socialist Leon Blum, and by the British Government, in which Eden was Foreign Secretary. Supposedly aimed at preventing the Fascist powers from sending arms, planes, equipment and men to Franco, instead it stopped supplies only to the Spanish Socialist Government. Protests grew.

Senior Labour figure Stafford Cripps announced that he supported the Governments position on non-intervention. It would, he thought, stop supplies reaching Franco’s forces. “I have Eden’s word on it“, he added. Others on the left didn’t share Cripps’ faith in Eden’s word. Enthusiastic demonstrations were held during the late summer in support of the Spanish Republican Government and the Spanish workers. But, despite the support for the Spanish people’s cause shown by the mass of Labour supporters, the Trades Union Congress, in September, voted in favour of the policy of non-intervention, by 3,029,006; to 51,000; and at the Edinburgh Labour Party Conference in October, 1,836,000 votes were cast for non-intervention and only 519,000 against.

It was the shock of this support for a ‘Popular Front’ strategy – together with the defeat of a resolution calling for acceptance of the Communist Party’s latest application to affiliate with the Labour Party, by 1,728,000 to 592,000,and of another asking for a meeting of “representatives of all working class bodies to bring about a United Front” by 1,805,000 to 435,000 – that led to the talks between the ILP, CP, and SL on a joint national campaign for unity in the Labour Movement.

When the (Trotskyist) Socialist League (SL) Conference on the United Front Campaign assembled in London on 17 January 1937, it was already certain that if it continued this strategy the League would be disaffiliated from the Labour Party.

On 18 January 1937, the day after the SL’s Special Conference, the Unity Campaign was launched. On 27 January the SL was disaffiliated by the Labour Party Executive. In March, the Labour Party declared membership of the SL incompatible with membership of the Labour Party. The SL now had either to retreat from the Unity Campaign, or face the wholesale expulsion of its members from the LP. The strategy chosen was to announce it’s dissolution.
The LP then countered this by forbidding its members on pain of expulsion to take part in the Unity Campaign as individuals. The Labour Party, the Communist Party, and many of the prominent supporters of working class organisations were now distancing themselves from the United Front in favour of a Popular Front of communist, socialist and liberal politicians, with a policy moderate enough to accommodate almost everyone.

Volunteers the world over joined International Brigades in Spain to fight Fascism.Ordinary working people such as Howard Andrews (pictured) who died in Taunton 2008 aged 101 left their homes to stand beside the Spanish people.

They Shall Not Pass

The other way to fight fascism was by giving them absolutely NO PLATFORM to organise. Fascism was confronted wherever it raised it’s head at such popular demonstrations as the battle of Cable Street on October 4th 1936 when the workers of East London confronted and smashed a provocative march by Oswald Moseleys Blackshirts.

“I am going to fight for your future!” 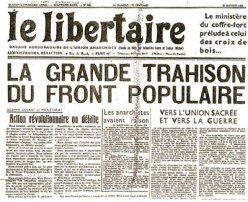