Move To The Left

During the war, Vernon Bartlett MP had been involved in the Propaganda Ministry, and had also joined the new, openly socialist Commonwealth Party spearheaded by Sir Richard Acland, JB Preistley and Tom Wintringham – and representing a broader swing to the left among the British people, many of whom were now calling for common ownership and collective solutions in politics.

In 1945 Labour decided to stand in Bridgwater again despite the protests of many that they ‘already had a markedly left-wing MP’. Norman Corkhill, a Fabian based in Exeter , was originally from Bolton, Lancashire.

However, by 1945, the new party’s influence was alreay waning, as the people strove for unity behind Labour.

Bartlett originally had no intention of standing again in Bridgwater, or anywhere else for that matter, but under pressure from the local Liberals he agreed to let his name go forward. In standing again for Bridgwater in 1945, Bartlett made it clear that his vote “would go in the same lobby as the Labour Party’s” – which was enough to convince Labour’s first-choice candidate, Captain Arnold Pope, to withdraw: “I shall never contest a seat where there is a markedly left-wing MP sitting. Should a Tory retake this seat the men overseas would be bitterly dissappointed.”

But Labour was in turmoil locally. The party left, now led by Bud and Ivor Fisher, argued that “the greatest danger at this point would be the return of a Tory!” and stormed out of a selection meeting at finding someone to replace Pope.

They didn’t get their way, however – the second meeting saw the selection of Normal Corkhill, an Exeter-based Fabian, and the election became a three-cornered fight.

Tory candidate confidently took to the field with what he hoped would be a winning slogan: “help Winston finish the job!”. Yet like Churchill himself, he was disappointed – war-time unity had pushed people leftward, not right, with a national clamouring for welfare and security. Even Somerset swung left, with Labour wins in Taunton and Frome.

The political world of the 1930s had been well and truly left behind. The failed policies that had produced decades of insecurity – firstly through the Great Depression, then through war – had been emphatically rejected, and the population was now looking towards a socialist horizon, both parliamentary and revolutionary.

Clement Attlee’s Labour Party swept aside the Churchillian Tories, winning 50% of the vote and a massive 200-seat majority. The Labour win heralded a new era of collective politics, bringing the nationalisation of key industries, a state-funded National Health Service, council housing and a cradle-to-grave welfare state, alongside an internationalist approach to collective security. Many imagined there would never be another Conservative government.

Vernon Bartlett opened his second term in office by delivering a string of staunchly socialist speeches that out-socailisted the Labour Party.

“When the Tories talk of freedom they mean the freedom for some to make large fortunes while ex-servicemen have the freedom to sell boxes of matches in the gutter. The real wealth of the Nation is not gold in the banks but the brain and muscle of the people. People who do not want to go back to the world of 1939… the Tories would not do the planning necessary for improvements.”

On a quiet rainy day in August 1945 – a far cry from the jubilant street parties of 1938 – Bartlett was re-elected.

Elsewhere in Somerset there were surprising results. Taunton had fallen to Labour and they’d come second in Weston-Super-Mare and in Yeovil, where results were so close there had to be a recount.

By 1950 ,Bartlett had become disillusioned with the role of Independent MP and politely declined to stand again. The Labour Party assumed second place for the next 30 years as the Tories swept back to power.

At a second election in 1951 – this time without a Liberal candidate, Labour got their highest vote ever:

From 1950 to the present day, however, the Bridgwater constituency has remained Conservative – despite an intervention in the last years of his life by one Vernon Bartlett, on behalf of the short-lived Liberal-Labour splinter group the SDP! 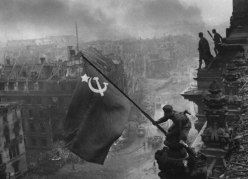 By May 1945 the Red Army had liberated East Europe, including Czechoslovakia, and the Red Flag flew above the Reichstag and the ruins of the Nazi Empire. 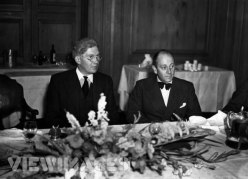 Towards a Common Wealth

Partisans of the World Victorious!