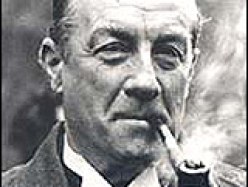 The new Prime Minister after the 1935 election was Stanley Baldwin – first Earl of Bewdley. This was his third term in office. He had been Tory leader at the time of the General Strike and in fact had taken over from Ramsey McDonald in June 35 and called the election to give him a mandate against the strident Labour opposition.

The General Election of November 1935 tested voters’ reaction to four years of National Coalition. Since ’31, National Liberal and National Labour leaders had enabled a massive Tory majority, giving it a facade of ‘in-the-national-interest’ credibility on the side.

The Depression, however, had deepened, and the international situation had got worse. In 1931 the Japanese invaded the industrialised Manchuria region of China, in 1933 Hitler had come to power in Germany and in 1935 Mussolini had invaded Abyssinia. And to make things worse the economy had continued to go downhill.

Shorn of its coalition-favouring right wing, the Labour Party started finally sticking to its socialist guns. The result was its re-emergence from the wilderness, picking up an extra 153 seats. The Liberals, fast being eclipsed as the main opposition party, dropped a further 11.

Arthur Loveys was selected in August 1935 and had been a member of Taunton Borough Council since 1927.

Loveys was Labour secretary and a Somerset County Councillor with a well-established commitment to the Labour and Trade Union movements. Starting out as Secretary of Newton Abbot Trades Council at the age of 20, he was a founding member of the Mid-Devon Labour Party, and eventually became President of the Taunton Co-operative Society.

He was also a prominent NUR (National Union of Railwaymen) member and had been part of a delegation of Labour members and Trade Unionists that visited Soviet Russia in 1926. He had been Election Agent twice and through his Co-op work was an ‘old friend’ of Bridgwater Labour Councillor Harry Goodman.

At his acceptance meeting for the Bridgwater candidacy, he quoted George Bernard Shaw about his fears of aerial warfare, “Both sides would fly out and drop their loads, then on return both would find there was nobody to cook their breakfasts.”

Arthur Loveys lived at 2 Salisbury Terrace, Kingston Road, Taunton, not far from Taunton Railway Station where he worked as a railway guard.

In 1935, the main issue in Bridgwater – and most other years throughout the 1930’s – was unemployment.

Local Communist activist Bud Fisher was a regular contributor to the Mercury, decrying the harshness of the new Government Bill, citing many severe local cases.

In his letter ‘Poverty and Plenty’, Bud attacked, “…spending on weapons of war whilst the local Education Board imposed fines on families who fail to send their kids to school… but if families can’t afford to buy boots for their kids, how does making them pay a fine help!” In the same letter he highlighted a local example of working people struggling to make ends meet,  “…unemployed benefit £1.12s … against expenditure – rent 7s6d, clubs 3s, insurance 1s, coal 3s, lighting 1s, milk 2s6d … total 18s. This leaves 14s to feed a family of 5 … hence the need for boots!”

Bud Fisher, in his capacity as leader of the NUWM (National Unemployed Workers Movement) also took on the local Establishment at an Urban District Council meeting in Burnham while they were considering proposals for celebrating George V’s Silver Jubilee. One exchange went as follows:

But while the situation was clearly desperate, there were plans afoot to deal with Bridgwater unemployment. In April came the announcement of “Great factory to be built on Bath Rd … 750 hands to start, rising to 2000.”

The Courtaulds ‘Cellophane’ works were to cost £500,000. The Council had to provide houses for key workers and supply 2 million gallons of water a day, as well as accept the sewage and effluent from the factory into their sewers. The result was the construction of Durleigh Reservoir. In return the company agreed to take its labour “from Bridgwater … as far as is possible.” This would potentially absorb the whole of the town’s unemployed.

1935 was also JUBILEE YEAR. The  ‘Old King’ George V, who, in fact, was to die the minute the year was over, took the opportunity to issue a warning about his son and successor Edward Windsor (the scandal-prone quasi-Nazi): “after I am dead, the boy will ruin himself within 12 months.”

Edward VIII was, as it turned out, to abdicate within a year of taking the throne in 1936. He went on to court much controversy with his pro Nazi views, support for appeasement (even after war had broken out) and admiration of Hitler. In 1940 he said, “In the past 10 years Germany has totally reorganized the order of its society … Countries which were unwilling to accept such a reorganization of society and its concomitant sacrifices should direct their policies accordingly.”

With its love-hate relationship with Royalty, Bridgwater took note of the Jubilee. The Town Council authorised street bunting, flood-lit St Mary’s and had children singing ‘Land of Hope and Glory’ on the Cornhill, while bells pealed from 6 am. Mayor Fred Reed read out a loyal speech: “… boys and girls whatever your future may be, be good subjects of a great King.”

Bud Fisher chose to commemorate the Jubilee by hanging out Red Flags from his 38 Clare Street home, alongside a giant Hunger Marcher’s banner. The result was a near riot, as locals tanked up on a heady mix of cider and patriotism attempted to take them down and the Police had to be called.

When the Election came that year, the Labour slogan was ‘Vote for Loveys… for peace abroad and security at home’. Unfortunately, both those things were looking increasingly unlikely – the election campaign was fought in the shadow of Mussolini’s invasion of Abyssinia, with Loveys stressing that ‘Sanctions need not mean war’.

However, it was a big shock to Labour when, at the 11th hour, a Liberal candidate ND Blake (a 39-year-old South Petherton farmer) decided to stand, making it a three-way-fight. With the slogan ‘Blake for Bridgwater’ and pushing the family name (in fact completely unrelated to Bridgwater’s most famous son, Admiral Robert Blake)  for all it was worth, he appointed popular local solicitor and independent (although really a Liberal) Councillor Harold Scholfield as his agent.

Amid the confused atmosphere of the National Government coalition, Blake had trouble pinning his colours to the right mast. “I am an independent Liberal Samuelite… I’m not NFU… but I am pro hunt… and … I’m anti means test.”  All things to all, then…

On his arrival at his first meeting at Blake Hall, he spotted a Tory car decked out in red, white and blue, responding, “Cut that out. These are the colours of all of us!”

Harry Goodman, clearly frustrated that the Liberals had stopped Labour having a clear run against the Tories, attempted to play down their chances: “The Liberal Party is nearly as dead as poor old Blake himself out there on the Cornhill.” 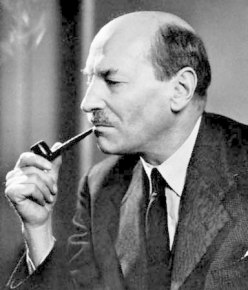 Baldwin did not make rearmament the central issue in the election. He said he would “support the League of Nations”, “modernise Britain’s defences” and “remedy deficiencies” but also said: “I give you my word that there will be no great armaments”. The Labour Party strongly opposed the rearmament programme. New leader Clement Attlee said on 21 December 1933: “For our part, we are unalterably opposed to anything in the nature of rearmament”. On 22 May 1935, the day after Hitler had made a speech claiming that German rearmament offered no threat to peace, Attlee asserted that Hitler’s speech gave “a chance to call a halt in the armaments race”.

Eventually, it was the Tories who yet again held the seat, with Labour and the Liberals almost equal in defeat. Labour candidate Arthur Loveys was kept on as prospective candidate for the anticipated election for 1940. Obviously unaware that said election would never occur, postponed by the advent of the Second World War, he embarked upon a major campaign of building support for Labour.

The Bridgwater result in 1935 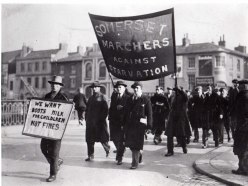 In the summer of 1938 there were 1,343 people registered as Unemployed – an increase of nearly 500 from the previous year. 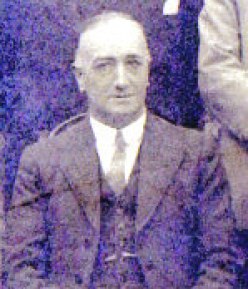 Labour Councillor Harry Goodman was a strong voice for Socialism in the town and a Labour Party loyalist whose loyalties would tested in the years ahead. In 1935 he was a powerful campaigner against Tories and Liberals alike.

Sir Richard Acland, MP for Barnstaple, studied the 1935 election and concluded that the ‘progressive’ vote was equally split between Labour and Liberals. 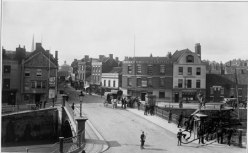 Bridgwater Parliamentary constituency stretched from Burnham on Sea and highbridge right along the North and West Somerset coast to Minehead. Labour was especially strong in Bridgwater, Highbridge and Minehead while the Tories were strong in the rural areas such as Exmoor and the ‘Blue’ Poldens. It was here in this idyllic rural retreat that one of the most important battles of the inter-war years was to be played out at the polls’, 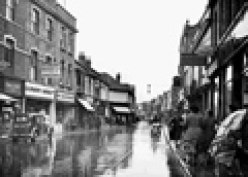 A rainy Eastover in the 1930s looking from the town bridge towards the roads to Bristol , Bath, London and Prague.