“..take our stand for freedom!”

“A firm stand by France and Britain, under the authority of the League of Nations, would have been followed by the immediate evacuation of the Rhineland without the shedding of a drop of blood; and the effects of that might have enabled the more prudent elements of the German Army to gain their proper position, and would not have given to the political head of Germany the enormous ascendancy which has enabled him to move forward. Austria has now been laid in thrall, and we do not know whether Czechoslovakia will not suffer a similar attack.”

“What will be the position, I want to know, of France and England this year and the year afterwards? What will be the position of that Western front of which we are in full authority the guarantors? The German army at the present time is more numerous than that of France, though not nearly so matured or perfected. Next year it will grow much larger, and its maturity will be more complete. Relieved from all anxiety in the East, and having secured resources which will greatly diminish, if not entirely remove, the deterrent of a naval blockade, the rulers of Nazi Germany will have a free choice open to them in what direction they will turn their eyes. If the Nazi dictator should choose to look westward, as he may, bitterly will France and England regret the loss of that fine army of ancient Bohemia which Was estimated last week to require not fewer than 30 German divisions for its destruction.

Can we blind ourselves to the great change which has taken place in the military situation, and to the dangers we have to meet?

This is only the beginning of the reckoning. This is only the first sip, the first foretaste of a bitter cup which will be proffered to us year by year unless by a supreme recovery of moral health and martial vigour, we arise again and take our stand for freedom as in the olden time.”

“..the last fortress of democracy..”

Labour leader Clement Atlee launched a blistering attack on Appeasement in the House of Commons.

“The events of these last few days constitute one of the greatest diplomatic defeats that this country and France have ever sustained. There can be no doubt that it is a tremendous victory for Herr Hitler. Without firing a shot, by the mere display of military force, he has achieved a dominating position in Europe which Germany failed to win after four years of war. He has overturned the balance of power in Europe. He has destroyed the last fortress of democracy in Eastern Europe which stood in the way of his ambition. He has opened his way to the food, the oil and the resources which he requires in order to consolidate his military power, and he has successfully defeated and reduced to impotence the forces that might have stood against the rule of violence.

The Prime Minister has given us an account of his actions. Everybody recognises the great exertions he has made in the cause of peace. When the captain of a ship by disregarding all rules of navigation has gone right off his course and run the ship into great danger, watchers from the shore, naturally impressed with the captain’s frantic efforts to try to save something from the shipwreck, cheer him when he comes ashore and even want to give him a testimonial, but there follows an inquiry, an inquest, on the victims, and the question will be asked how the vessel got so far off its course, how and why it was so hazarded? All the faults of seamanship and errors of judgment must be brought to light, and no amount of devotion at the eleventh hour will save that captain from the verdict that he has hazarded his ship through bad seamanship. Parliament is the grand inquest of the British nation, and it is our duty to inquire not alone into the actions of the Prime Minister during the last few days or the last few weeks, but into the whole course of policy which has brought this country into such great danger and such great anxiety…”

“It is no exaggeration to say that many prominent representatives of the Conservative Party, speaking for powerful landed and financial interests in the country, would welcome Hitler and the German Army if they believed that such was the only alternative to the establishment of Socialism in this country.

Their blatant and noisy approval of German and Italian ferocity and frightfulness in Spain, and their utter lack of concern for the sinking of British ships and the sacrifice of British lives, provides abundant proof of this contention.

The Nazis knew that in all capitalist countries there were men such as these ready to betray their own people, if by that means they could save their own property and privilege.

The first indication we got of the policy that led to Munich was in a speech by a young gentleman named Lennox-Boyd, M. P. for Mid-Bedfordshire. Until his elevation to Ministerial office, Mr. Lennox-Boyd had been a member of the notorious pro-Franco propaganda organisation, the Friends of National Spain.

This gentleman had been one of Mr. Chamberlain’s first Back Bench selections for a Government post. The only reason anyone could see for his appointment as assistant to the Minister of Labour was his ferocious hatred of the democratic. Government of Spain and his open expression of brutal glee at every advance of its German, Italian and Franco enemies. He was chosen because he had all the qualities and all the connections of a good fifth-column supporter. It was from this pro-fascist junior Minister we got the first statement of policy on Czechoslovakia. In a speech delivered at Biggleswade, to the local Conservative organisation, he informed his audience and the country as a whole that the Prime Minister had no intention of doing anything to defend Czechoslovakia.”

The Swastika Flies Over Prague 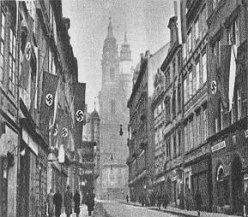 In November 1938, Emil Hacha, succeeding Benes, was elected president of the federated Second Czech Republic, consisting of three parts: Bohemia-Moravia, Slovakia, and Carpatho-Ukraine. Lacking its natural frontier and having lost its costly system of border fortification after Munich, the new state was militarily indefensible.

In January 1939, negotiations between Germany and Poland broke down. Hitler, intent on war against Poland, needed to destroy the remnants of Czechoslovakia first. He scheduled a German invasion of Bohemia and Moravia for the morning of March 15. In the interim, he negotiated with Slovak Populists and with Hungary to prepare the dismemberment of the republic before the invasion.

During the early hours of March 15, Hitler informed Hacha of the imminent German invasion. Threatening a Luftwaffe attack on Prague, Hitler persuaded Hacha to order the capitulation of the Czechoslovak army. On the morning of March 15, German troops entered Bohemia and Moravia, meeting no resistance. The Hungarian invasion of Carpatho-Ukraine did encounter resistance, but the Hungarian army quickly crushed it. On March 16, Hitler went to Czechoslovakia and from Prague’s Hradcany Castle proclaimed Bohemia and Moravia a German protectorate.

Independent Czechoslovakia collapsed in the wake of foreign appeasement of her enemies, Fascist aggression and internal tensions.