The Bridgwater of winter 1937-1938 was wracked by a serious typhoid outbreak that had spread to the area from nearby Highbridge and Hunstpill.

By the New Year, there were signs of it easing off, but we know of at least 33 individual typhoid cases thereafter, including several deaths. Understandably precautious, men continued taking their own glasses into Bridgwater pubs well into 1938. The time a Highbridge man walked into a local pub with glass in hand and caused the rest of the wary punters to hastily make for the exit is well remembered in folk memory.

Meanwhile, politics continued as usual. Against the backdrop of a worsening international outlook and talk of war, the Bridgwater Peace Group was actively campaigning and debating peace in the 1930s, and how best to maintain it. Fronted by its Chairman, Vincent Burston, its Treasurer, Sellick the accountant (of 1 King Square), and the effusively active Liberal Party member Gwen Polland, of ‘Oaktrees’ Wembdon, the Peace Group was a vocal and respectable force in the town. Their top story of Spring 1938 was that they had found a home for three Basque children – in the nearby Quaker town of Street – who had escaped the carnage of Spain’s Civil War, the latest in a line of Spanish refugees aided by the Group.

The town Labour Party was being similarly energetic. Arthur Loveys, though soundly beaten at the ’35 election, was sounding anything but defeated, launching a series of meetings in anticipation of an early general election, something many felt was likely given the deteoriorating political climate in Europe.

On February 16th, addressing a Labour meeting in Puriton chaired by party stalwart Walt Farthing, Loveys laid in to the National Government. Baldwin’s coalition was ‘not to be trusted in foreign policy matters’, and its shameful inaction over the Spanish Civil War showed a shameful lack of “Government support for the democratically elected Republican Government in Spain”.

But Loveys wasn’t restricted to critiquing specific soft-on-fascism government policies, and launched into a broader assault on liberal democratic capitalism as a whole, demanding ‘pensions for all, nationalisation, control of the land and better wages’. Loveys was joined by Bridgwater Labour veteran, Jim Boltz, who spoke passionately against the rise of fascism while also calling for government-guaranteed jobs and housing at home.

Collectivist feeling was running high elsewhere in and around Depression-hit Bridgwater. On February 23rd, Labour councillor and Bridgwater Co-operative Society President Harry Goodman addressed 500 Co-op members in Blake Hall. A further 600 couldn’t fit inside and formed an impromptu festival outside. Maurice Woodbury, Co-op secretary, passionately endorsed the Society as ‘one of the key steadying influences in the lives of working people in the town’.

It empowered working people, helping them to save and allowing them to become “their own traders”, while employing unionised labour and ensuring local people’s “spending power was not being used to make private fortunes for wealthy shareholders to transport to the Riviera!”

Bridgwater’s traditional working-class organisations seemed to be beginning to bounce back in 1938.

The Bridgwater constituency branch of the Left Book Club proved to be a major source of recruits to socialism throughout the 1930s.

Cresswell at Oare during WW2

On March 16th, a Left Book Club meeting at Minehead discussed the possibility of the local Liberal and Labour parties co-operating at the coming election. Speaking afterwards, a Libreal Party spokesman predicted that “such a development will probably take place”. The notion of an anti-Tory alliance drew much support across the Somerset Left. Left Book Club Chairman, the Reverend Creswell Naesmyth Webb of Oare on Exmoor, believed that “the only chance of getting a progressive Member of Parliament for the Bridgwater division in place of a Conservative was by political collaboration between other parties of a progressive turn of mind… I have started getting into trouble over it and I daresay I shal get more … but let it come”.

For the moment, though, these were just his personal musings – there had been “no official moves” and that he had began tentatively looking in to the prospects for collaboration “purely and simply out of my own perversity”.

Webb had recently given a talk on a book by Liberal Party left-winger Richard Acland, and had “written to him for certain information, called to see him in hospital” after the Barnstaple MP had been taken ill. The vicar admitted that the had been the one to first make “contact with Lib and Lab representatives to see how the land lies, and what measure of support there might be for such a movement.”

“I have no ambition to change the Labour Party and its views or objectives or crush Liberalism. I want to try to co-operate with the object of getting sound progressive men into parliament so that we can redirect the Government and its influence in Europe.”

But before long, bold strides were being made towards local alliance. On March 30th, members of the Liberal and Labour parties attending a Left Book Club meeting devised a common motion supporting an electoral pact. Read by E. Hemingway from Minehead Labour, the motion announced that “the time has come when the progressive forces in the division should recognise the urgent need for joint action, to secure the election of a candidate … who will be prepared to strengthen the League of Nations, and support a progressive and democratic policy in home affairs. Thereby, we urge the associations of the respective parties to consider how this might be brought about in Bridgwater”.

Both Hemingway and John Perkins, a Liberal from Porlock, agreed to take the motion back to their respective parties. As for the Left Book Club itself, the meeting voted unanimously to support the motion, and Webb spoke to sum up.

On April 27th, another Left Book Club meeting drew large crowds to the Old Corn Exchange in Bridgwater, spurred by posters asking “Why not pull together Liberal and Labour and progressive Conservatives for peace, democracy and security?”

Reverend Webb chaired the meeting, soberly arguing that “the situation today is far graver than 1914. We need a European police force to defend us from the bullies – and that could not be achieved unless we put aside our party considerations and unite for the cause of peace.”

The next speaker was Arthur Loveys. After urging people to join the Left Book Club, he spoke passionately of the link between fascism and war: “there were fascists in England too. In 1935, Bridgwater elected Croom Johnson who supported the National Governmant – which was in fact controlled by the Cliveden set, people like Lady Astor and Lady Londonderry who was in fact helping Italy, Germany and Franco in Spain .” He hoped “the working people of this country would arise under the Labour Party and take control.”

Richard Acland MP was next to speak: “the only alternative to dictatorship is democracy”. Under democracy, he continued, “political parties should flourish”. But a new situation had arisen internationally which he felt the Left couldn’t ignore. Britain faced three dictatorial, aggressively expansionist, highly militarised states in the form of Germany, Italy and Japan, and possibly a fourth, Spain under Franco, before long.

The only hope for decency and democracy was “collective security and bringing the world together”. The most urgent political battle was between those who believed in “democracy and collective security” and those who believed in “armed isolation based on selfishness and expediency”. Acland regretted the fact that Labour’s leadership felt they alone could defeat government policy. In his view, the aim had to be to “unite to utterly sweep this National government from power” and that “any leader, national or local, who who personal or party reasons did anything to prevent that would repent in blood and tears before many more months had passed”. Given Labour’s stubborn refusal to co-operate nationally, Acland concluded, “the matter now rests with the local Labour Party”.

Decades later, during one of Acland’s last ever interviews, the former MP revealed that he was planning to position Langdon Davis, a London-based war correspondent present at the Corn Exchange meeting, as a potential unity candidate for Bridgwater at the next election. However, having witnessed a passionate and powerful speech by Labour’s Arthur Loveys, Davis rejected Acland’s offer.

Undaunted, Acland and Webb continued to strategise for left-wing unity in the area. Acland was confident that he could pull enough strings within the Establishment to get Croom-Johnson, Bridgwater’s sitting Tory MP, appointed as a Justice of the High Court. When Croom-Johnson inevitably left parliament to take up this prestigious appointment, his seat in the Commons would be left empty, meaning a by-election would be called to replace him. Then, Acland believed, he could potentially unite the equally-balanced progressive forces within the Bridgwater constituency, have them stand a unity candidate against the official National government candidate, and possibly win. Acland was laying the grounwork with dedication. But he needed the right man, and the right moment, for his audacious plan to work. Both were to arrive within months.

Arthur Loveys: the prospective Labour candidate urged people to join the Left Book Club – of which he was a member – then warned that fascism would lead inevitably to war. “There were fascists in England too . In 1935 Bridgwater had elected Croom Johnson, who supported the National Governmant – which was in fact controlled by the Cliveden set, people like Lady Astor and Lady Londonderry, who were in fact helping Italy, Germany and Franco in Spain .” Loveys hoped ” the working people of this country would arise under the Labour Party and take control.”

Sir Richard Acland, whose towering presence and emotional speeches urged the progressive parties to unite against the National Government on the moral principle of collective security in order to combat Fascism.

“The Left Book Club, founded in May 1936, was a key left-wing institution of the late 1930s and 1940s. Founded by Stafford Cripps, Victor Gollancz and John Strachey, its aim was to revitalise and educate the British Left, as well as “help in the struggle for world peace and against fascism”. Originally hoping to break even with 2,500 members, it had 40,000 recruits within the first year, and 57,000 by 1939. The active branches in Bridgwater and Minehead were key to educating , agitating and unifying the left.”

The unlikely but unstoppable force behind efforts to unite the opposition in Bridgwater’s constituency was the Reverend Cresswell Webb of Oare, Exmoor. Webb was a key member of the Left Book Club, an enthusiastic social reformer and an energetic campaigner. Without Webb, Bridgwater’s Popular Front would have been dead in the water.. 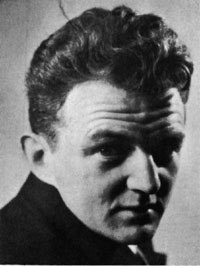 John Eric Langdon-Davies (1897–1971) was a British author and journalist. He was a war correspondent during the Spanish Civil War and the Russo-Finnish war. As a result of his experiences in Spain, he founded the Foster Parents’ Scheme for refugee children in Spain, now called Plan International. He was the first candidate Acland considered as a candidate for Bridgwater but became disillusioned that Labour would support him based on the strength of Arthur Loveys speech in the summer of 1938.