The purpose and value of a resource such as this:

It’s a warning not to give the fascists and their apologists an inch of credibility and to unite against them in strength wherever they raise their heads and not to wait until it’s too late, because we’ve seen the results of fascism only too well.

This website has been created by Brian Smedley with the assistance of The Engine Room, 52 High Street, Bridgwater and has been sponsored by Bridgwater Town Council so that people have access to the full story of the by-election of 1938 and can understand its role in the Fight against Fascism.

The website design was updated in 2013 by Jana Branecka with editing and proof-reading by Lieutenant-Colonel Simon ‘ Chuckle’ Hann.

The research has been based on 3 key sources:

Which I can’t reference specifically but these days anyone can click almost anywhere and find almost anything.

What can’t be accessed so easily are ‘Reminiscences’. It’s a valuable part of any communities social history that people should record their memories for posterity. In this respect I am grateful to Dave Chapple – whose Somerset Socialist Library project maintains and develops valuable records of interviews with people who took part in historical events (even if they didn’t know it at the time) and maintains them for future generations to cross reference and learn from.

Daves book Bridgwater 1924-1927 – Class Conflict in a Somerset Town, is one valuable reference source for the interwar years and will soon be joined by many more volumes based on Daves’ research.

In this respect I also personally interviewed the following people for their own memories of the Election – Sir Richard Acland, Basil Lott, Tom Edmunds, Hilda Pound, Gordon Fisher, Maurice Spender, Bert Gardner, Ivor Davies, Bob Rogers all now sadly passed away whilst John Turner and Ken Richards-both Labour councillors who grew up in the town in the 30s, are thankfully still with us.

I am also grateful to the people who visited the original website and subsequently got in touch. Notably Alastair Kinross, grand-son of Cresswell Webb, who supplied additional information and photographs. Also to Somerset author John Fletcher, whose play “Sea Change” was set during the Bridgwater By-Election and was broadcast on BBC Radio 3 (link below).

It’s traditional to list a whole pile of books and other written resources so that people can delve into the same to see if I made stuff up or not, and apart from my own collection, I am again grateful to Dave Chapple but also to Dave Hanna and Eugene Byrne for the following:

I’d also like to thank some people for their practical help. Milos Salus in Slovakia for his assistance in making some photos web friendly for me and Al Butter for technical assistance with film and video uploads plus Cllr Kath Pearce for ‘front of house’ assistance at the launch event.

‘Mud and Khaki’ by Vernon Bartlett 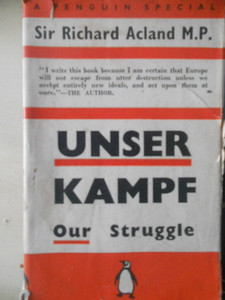 ‘No Man’s Land’ by Vernon Bartlett

‘Struggle For Africa’ by Vernon Bartlett

‘The Colour of their Skin’ by Vernon Bartlett