Bridgwater in the 21st Century

Bridgwater and the world around it may have changed many times over in the 70 years since 1938. At the same time, many things haven’t.

In 1938, Britain had a Tory-dominated  National coalition government, with a socialistic Labour Party still in its infancy forming the opposition – and while the Liberals were nominally in government, they were very much Britain’s third party and fading fast.

In 2020, Britain has a Tory government, a Labour opposition, and a Liberal Party that’s very much Britain’s third party and fading fast after a disastrous coalition with the Tories.

In 1938, Bridgwater was run by a clandestine coalition of Tories and Liberals describing themselves as ‘Independents’ with a vociferous Labour opposition.

In 2020, Bridgwater Town Council is run by a Labour majority with Conservatives in opposition and no Liberals represented – but that council is in a junior position to Tory-dominated Sedgemoor District Council, gerrymandered into existence as a cast-iron Conservative fiefdom in the 1970s (the District has been Tory apart from brief Lib-Lab period in the mid ’90s!).

in 1938, Britain was caught in the path of the rising fascist tide and trying to avoid involvement in a second global conflagration, the key debate of the day being, ‘how’.

In 2020, Britain has swung hard to the right and is in the hands of a Tory government that has taken the Country out of the European Union that had been developed after world war 2 to hold the continent together in peace and prosperity. The ‘Brexit’ mania that gripped the British population was hardly understood by the rest of the world, dominated the countries politics from 2016 until the Coronavirus pandemic of 2020 knocked it from the headlines.

In 1938, Bridgwater was severely hit by the unemployment of the Great Depression and looked to the building of the Cellophane factory to put people back to work.

In 2020, the Cellophane had long closed and the world, and the town, was suffering a new recession brought about by the greed and unaccountability of the financial sector. Although this had almost turned around by 2020 the Brexit mania had sent the pound plumetting and the Coronavirus had devastated the population sending millions onto the dole with a disastrous recession looming.

In 1938, Bridgwater had a Tory MP who was thrown out by a liberal/socialist Independent.

In 2020, Bridgwater has a Tory MP with the biggest majority in decades 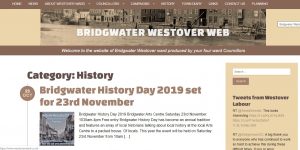 Bridgwater History on the Westover web

Other blogs by the author