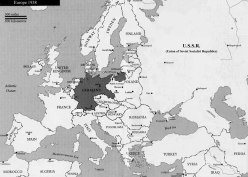 The 1930s saw a massive failure of global capitalism, bringing stock market collapse, the Great Depression and, as a result, the emergence of extreme political alternatives that polarised societies.

The First World War (1914-18), optimistically known as the Great War (‘to end all wars’) at the time, shaped the International scene. The Allied powers – Britain, France and the USA – cemented their victory by imposing the Treaty of Versaille on their defeated opponents. The Austro-Hungarian Empire was totally dismantled. In its place, a string of new mult-ethnic states emerged, from Poland in the North, through Czechoslovakia and down to Yugoslavia in the South. At the same time, Germany in particular was subjected to humiliating victory conditions, stripped of its multi-ethnic border regions, strictly limiting its access to arms and the size of its armed forces, and imposing massive financial sanctions which led to considerable suffering.

Meanwhile, Italy and Japan, junior partners in the Allied Coalition that won the First World War, were bitterly disappointed by the post-war settlement. Both felt their war efforts went unrewarded, and lingering grievances led both to move rapidly and radically rightwards in the following decade. Totalitarian, aggressively expansionist regimes sprung up in Rome and Kyoto, hungry for the military conquest they felt would get them into the imperialist club. Italy under Benito Mussolini became the world’s first fascist state – offering the earliest example of a rabidly nationalistic, belligerent creed that initially won widespread popular support by restoring national pride and appearing to put the country back to work, while smashing Communist, socialist, then eventually all democratic opposition.

In the East, Emperor Hirohito and Admiral Tojo of Japan sought expansion into regions rich in the raw materials necessary for launching a modern capitalist economy. By the 30s, they had built up a modernised, efficient military machine capable of invading China, sustaining a brief war with Russia and eventually taking on the might of the USA and the European colonial empires.

Over the previous century, imperialist Europe had carved up huge swathes of Africa and Asia in the name of international capitalism and the pursuit of profit. The wholesale rejection of that system proved to be a prime factor in the growth of communism across Europe and, most notably, in Russia. The Russian Revolution of 1917 saw a disciplined vanguard of professional revolutionaries seize power in the name of the people, and, once the dust had settled, forge the first self-declared socialist state in history. The startling victory of Lenin and the Bolsheviks was completely unexpected, and unsurprisingly set capitalists and ruling elites on edge the world-over. The resulting panic saw some seek increasingly extreme ways of protecting themselves and their ill-gotten gains – and some saw a saviour in fascism.

In Germany, post-war grievances and anti-communism collided, spurring the rapid Nazi ascent to power. In 1933, Adolf Hitler became Chancellor of Germany, bringing murderous racism and aggressive German expansionism to the world stage. Nazi Germany was the third and final major addition to the war-mongering totalitarian Axis that was to be the touchpaper for the international political crisis of the 1930s.

The rest of the world seemed incapable of doing anything other than watching from the sidelines. The harsh post war settlement at Versailles was followed by a half-hearted attempt to consolidate the new world order through a system of ‘collective security‘, made official with the establishment of the League of Nations to resolve disputes between states. However, with the USA retreating into isolation amid the domestic hardship of the Great Depression, the young Soviet Union widely treated as a dangerous communist pariah state and Germany, Japan and Italy all seeking expansion and redress, the burden of world policemen fell on the old Empires of Britain and France.

This is what International Capitalism had come to. All the great scientific achievements, all the advances in engineering, all the democracy in the world had created this. Was it a wonder people might look elsewhere for solutions? 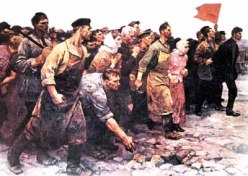 In the 19th Century Karl Marx had outlined what was wrong with Capitalism and presented a way towards a socialist alternative. “The point is to change it”..in 1917 Lenin and co seemed to be doing just that.

“Nazi ideology developed in Germany by applying the Fascist solutions of 1920’s Italy to the crisis in inter-war Germany. Between the unemployment created by Capitalism , the fear about revolutionary socialism and injected with fantastical notions of Nationalism alongside that old standby , ‘racism’ , this period was a fertile breeding ground for demagogues to offer extreme solutions.”